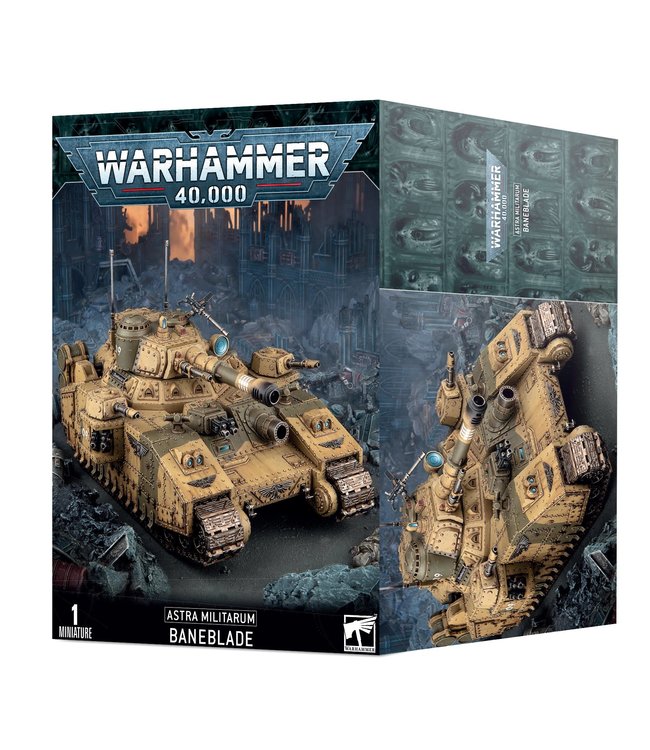 More rolling fortress than vehicle, the Baneblade super heavy tank is possessed of overwhelming firepower. Wherever a Baneblade sees battle, it becomes the centre of the battle line, Imperial Guardsmen and even smaller tanks sheltering in its lee as its enormous primary cannon and numerous other guns hammer the foe into submission.

This gargantuan multipart plastic kit builds a super-heavy Baneblade, a thundering tank that wields a full arsenal and is capable of absorbing punishment that would annihilate a small army. If you’re looking for a lynchpin around which a mighty armoured column can be built, a super heavy tank is a fine choice that can shock your foes and soak up incredible amounts of firepower, sparing the rest of your army. It is armed with a mighty baneblade cannon and co-axial autocannon on the turret, plus a demolisher cannon on the forward hull, 2 lascannons on side turrets, twin heavy bolters on a forward hull turret, 2 twin heavy flamers in sponson mounts, and a heavy stubber in a pintle mount atop the turret. The sponson flamers can be replaced with another 2 twin heavy bolters, and extra sponsons can be added with additional lascannons and either twin heavy bolters or twin heavy flamers. That’s a LOT of firepower.

You’ll also find cosmetic options, like extra stowage, additional armour plating on the treads, tow hooks, fuel, and options for gunners and tank commanders in the hatches – including a choice of different heads. You can alternatively build the tank commander on foot, armed with a bolt pistol or laspistol in one hand, and a power sword or pointing hand in the other. No matter how you build it, your bits box will appreciate all the extra plastic left over.