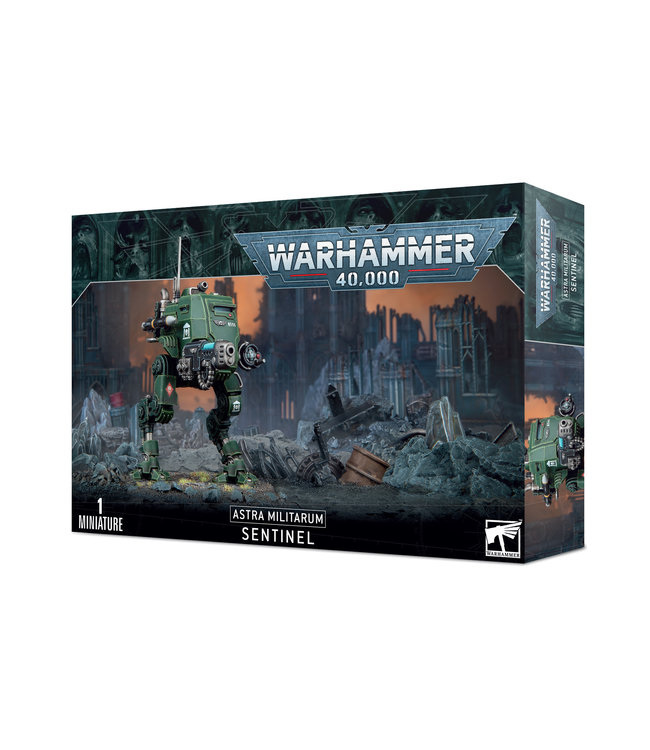 Sentinels are all-terrain bipedal vehicles, employed by the Astra Militarum to provide swift recon or deploy rapid-response firepower. Open cockpits and augur devices enable the pilots of Scout Sentinels to survey the enemy with ease, while their lighter armour and enhanced gyro-stabilisers allow them to swiftly traverse the roughest terrain and bring heavy weapons to bear from unanticipated angles.

This multipart plastic kit builds one Scout Sentinel – a light walker toting heavy firepower on an agile chassis. There are loads of options in the kit, allowing you to arm your Sentinel for any battlefield role with an autocannon, heavy flamer, missile launcher, multi-laser, or plasma cannon. You can additionally equip your walker with a poseable Sentinel chainsaw for more melee punch, and a hunter-killer missile for extra firepower. You’ll also find plenty of cosmetic options, including a searchlight and smoke launchers, stowage and spare equipment racks, extra fuel canisters, and four different heads for the exposed pilot.

This kit can alternatively build an Armoured Sentinel with an enclosed cockpit, which trades speed for extra durability in the harshest warzones.